You are here: Home / Europe / Germany / Rhineland-Palatinate / Village festival at Pentecost in Eckfeld

Already in 2014, we attended the Village festival at Pentecost. It is staged by the volunteer fire department in Eckfeld. This year we decided to visit it again.

Eckfeld, a municipality in Rhineland-Palatine, became known for his prehistoric excavations. The Pentecost festival is famous beyond the village limits, especially because of the freshly baked bread.

Once a year Leo and his friends bake bread in the village bakehouse, according to an old tradition. This should also keep the culture of bread baking alive.

On our arrival, Leo and Frank are at work already since 5 o’clock in the morning. Leo’s wife has prepared something for the cakes already the day before. And of course, the two are actively supported by Willi, despite his advanced age.

But first, we go to the church, where a small celebration for the fallen of World War II takes place. The band starts playing after the parish priest appears with his altar girls and boys.

Then he blesses the memorial. Following this, he gives a very good speech aimed at self-satisfied politicians and an appeal for peace and against the war. Especially in this day and age, it is becoming increasingly important to stand up for peace.

Afterward, the men of the volunteer fire department lay some flowers down at the monument and a small procession with the band moves through the village.

Even the cows are astonished by the unusual activities. 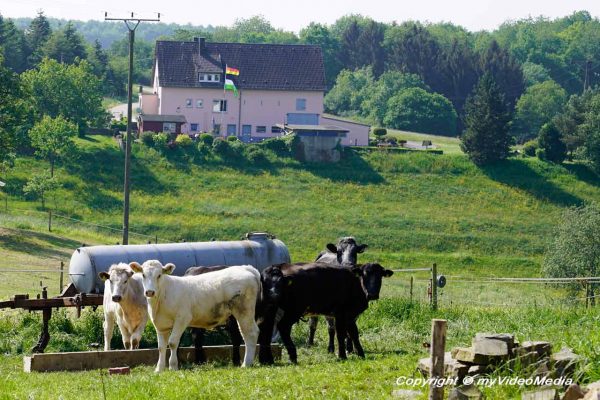 We return to the bakehouse, where the yeast dough is being prepared. Besides bread, one bakes also crumb cake with various fruit inlays today. These are rhubarb and vanilla pudding next to apple and cherries.

The weather forecast predicts clouds and strong wind for the day. In the morning the weather is nice and so we first make a short drone flight over the idyllic village.

Quickly we notice that one is very open-minded about modern technology. Many houses already have photovoltaic systems for power generation. And we were not wrong. Later we learn that the village already has over 100 MBit Internet connections.

Most villages and towns in the Eifel can only dream of that. We also notice that many people have e-bikes here. Beautiful idyllic landscape, coupled with modern technology, is almost like paradise.

Next, we pay a short visit to the festival ground to taste the delicious grill specialties. It is still a little early so that few people are here.

But the band is playing and the bar is occupied and supplies those present with drinks. For children, there is a bouncy castle, a swing, and a small carousel.

Once again, we observe the activities in the bakehouse. Here one works tirelessly. The loaves of bread sell like hot cakes. The crumb cakes are prepared and baked. Also Leo’s sister actively supports the preparation. Later, one sells the cakes in the community hall to the general public.

With fresh bread and delicious crumb cake, we make our way back home, pleased about this beautiful day.